Ridgerunner magazine, a publication written by West Plains High School folklore students packed with stories of the Ozarks area and points of interest throughout Missouri and Arkansas, has a legacy of excellence going back 39 years.

That legacy continues with the recent award of first place in the American Scholastic Press Association’s annual competition, with entries from hundreds of schools nationwide competing.

It’s not the first time the publication has achieved such high marks: Ridgrunner won first place or first place with special merit from 1987-2018; the latest award was given to the 2022 edition written and edited by 2021-2022 school year juniors and seniors in Dianna Locke’s publications class.

Locke and her class had been working on building the magazine back after she resuming editing it in 2020.

The magazine was founded in 1984 by Jim Decker. Decker, who has since retired, was a high school English department teacher and the first to teach an Ozark Folklore class, which remains as an English elective. Decker said his purpose in teaching the class and starting a new publication was to “keep the spirit of the Ozarks alive.”

Janice Langston-Bowden, a longtime English teacher, edited the magazine after Decker before she, too, retired from teaching and Locke took over.

Ridgerunner staff members competed against other students at some really big schools, and other winners included publications from schools in California, Arizona, Washington and Wisconsin, among schools with 1,000 to 1,700 students.

She has put in 18 years total with Ridgerunner, and her students not only do a lot of researching and writing, but public speaking, and usually take the photos that go along with the articles, and write autobiographies as well.

Ridgerunner topics include the places, personalities and legends of the Ozarks and Missouri. Articles in the latest publications of the award-winning magazine have featured the Lemp Mansion in St. Louis, dubbed one of the most haunted places in America. LaCaze authored the article about the home, owned by the Lemp brewing family at the turn of the 20th century and the site of a series of tragic deaths.

Students are encouraged to write about topics they are interested in and do the background research on those topics, skills that will serve them well in life and in further education. LaCaze says she loves journalism and plans to minor in it at the University of Missouri, but the public speaking requirement was a challenge for her, at least in the beginning.

"I hated it at first," she admitted.

But it's those kinds of tasks that help students move out of their comfort zone, Locke says.

"This is a confident group and I love to see them grow and flourish," she observed.

For Metz, who moved here in 2018 from the Chicago suburb of Bloomington, Ill., Ridgerunner has offered the opportunity to learn about the Ozarks. He commented the area is "a lot more interesting geographically" than his previous home in Illinois, and his articles often highlight the natural beauty of the area's unique hills, hollers, springs and caves. Metz plans to get a degree in business, then join the Marine Corps.

Lamb has an interest in fishing and hunting, and researched Lake Taneycomo in Taney County as both a premier trout fishing destination an a waterfront entertainment and shopping area known as the Branson Landing in downtown Branson.

The publication is printed at the South Central Career Center by Commercial and Advertising Art instructor Scott Heidy, and is usually 16 to 20 pages long.

Ridgerunner is published twice a year, in December and May, and may be purchased for $5 at the Book Nook, 203 Washington Ave. in West Plains, or by subscription for $15. Subscriptions are two issues and include postage costs; to subscribe, contact the school by calling 417-256-6150 or by mail at Ridgerunner Magazine, West Plains High School, 602 E. Olden, West Plains, MO, 65775.

The magazine is published ad-free and purchases help cover the cost of printing.

Several area schools remain out for weather; a third of HOEC members still waiting for power to return

Several area schools remain out for weather; a third of HOEC members still waiting for power to return 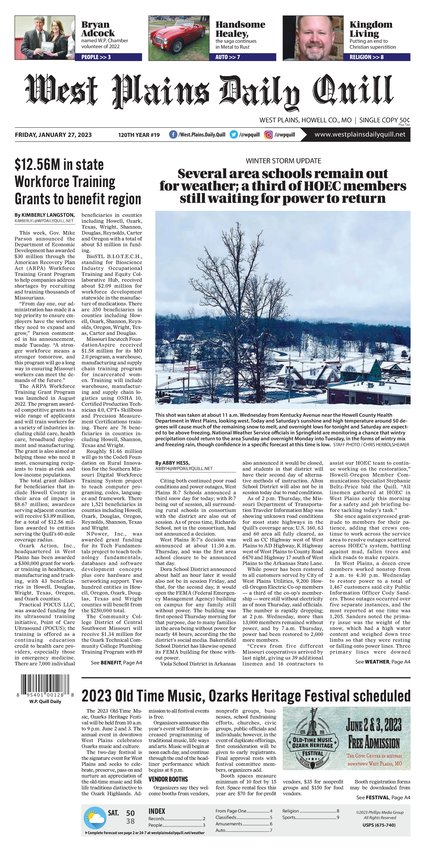