The West Plains City Council on Monday approved an ordinance to continue the city’s half-cent capital improvements sales tax and hold a special election for the tax in August.

West Plains City Administrator Sam Anselm introduced the ordinance to council members for its final reading. He said the ordinance is to continue the city’s capital improvement sales tax that was last renewed by voters in 2012 and set to expire in 2023.

The ordinance also stipulates the city will hold a special election Aug. 2 for the sales tax proposition.

“We want to give enough time for an education campaign to allow voters enough time to ask questions,” Anselm explained. He noted the city has had the same capital improvement sales tax for 30 years.

According to the ordinance Anselm provided to council members, the tax would be on the receipts from all retail sales or taxable retail services within the city that are subject to taxation by the state to fund capital improvements.

This would include the cost of maintaining and operating existing capital improvements made with the revenues raised by the sales tax.

Per state statute, the tax would be imposed on all sales of metered water services, electricity, electrical current and natural, artificial or propane gas, wood, coal or home heating oil for domestic use only.

In a 5-0 vote, council members passed the ordinance.

Per the ordinance, the proposition voters will see on the Aug. 2 ballot will state, “Shall the municipality of West Plains, Missouri, continue to impose a sales tax of one-half of one percent (1/2 of 1%) for the purpose of funding capital improvements, including the cost of maintaining and operating existing capital improvements made with the revenues raised by such tax? Passage of this measure will not increase the city’s overall sales tax rate.”

Anselm said during the first reading of the ordinance in April that the city plans to start an advisory board to the council consisting of residents who will look at all of the city's special dedicated tax revenue sources, including the city's capital improvements sales tax and transportation tax.

Vietnam veteran gets honor of a lifetime in trip to Washington, D.C. 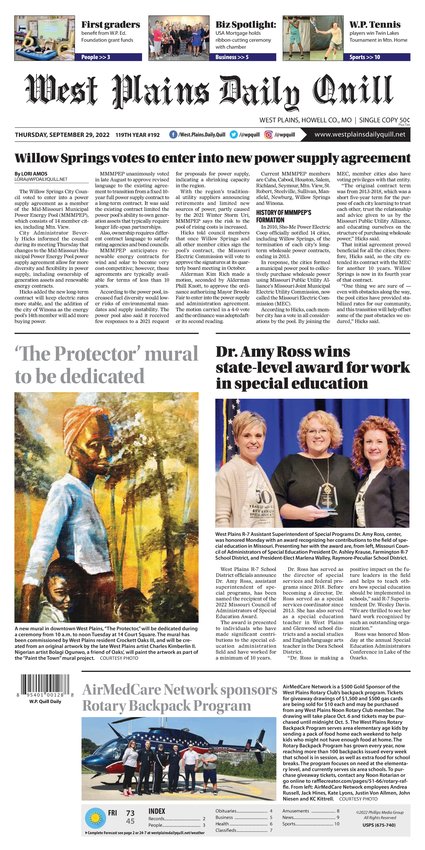